The Story of Stock Car Racing at

It may sound unlikely but it is true. In 1974 Stock Cars were let loose at the National Stadium. This page briefly sets out the story behind these events and is based on a short feature that I prepared for SHORT CIRCUIT magazine in September 1995.

I am keen to develop these pages and would welcome the following:

E-mail your comments, contributions and suggestions to rollingstart@yahoo.com

The Stock Cars appeared at Wembley Stadium on just two occasions in 1974. The meetings were organised by Trevor Redmond in what must be seen as the most spectacular promotion in British Stock Car racing since the inauguration of the sport in 1954.

The meetings were held on Saturday June 29 and Sunday August 18. The June meeting featured BRISCA F1 Stock Cars, Hot Rods and various match races. The August session included the BRISCA F2 Stock Car World Championship and the F1 British Stars Trophy. By all accounts the August meeting- which is where all the accompanying photographs come from- was the better of the two held. 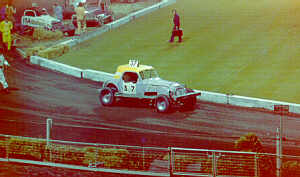 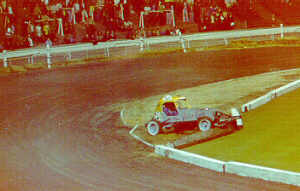 The October edition of STOCK CAR reported that "the second meeting… proved that it can be done at this magnificent stadium…. but … the F1 cars were not prepared to play second fiddle to the F2 lads, championship, or not" and the September edition of STOCKCAR SUPPORTER which said that "…the June meeting was, to the Stock Car enthusiast, a little disappointing. Problems with presentation, the cancellation of the consolation event, too much emphasis on the other forms of racing" but of the August event went on ".. the presentation was excellent… some really good racing. With more experience, a lessening of the fear of the centre green (i.e. the hallowed turf!) and the knowledge that the two fences, inside and out, will do their job, and any future racing will improve some more.

Of course there were no further meetings at Wembley and indeed throughout the remainder of the seventies only four more meetings were held in London. These were all held at Harringay, one in 1978 and three in 1979. The BRISCA F1 Stock Cars were to retreat to the Midlands and North of England and failed to return to the Capital until 1996, at Spedeworth's superb Wimbledon Stadium.

It still remains the case that the BRISCA F2s last appearance in London was for their 1974 World Championship event although they can now be seen regularly on the outskirts of London at Arena, Essex.

In 2000 the F1 Stock Cars appear just once at Wimbledon Stadium, on Sunday 22nd October. Why not go along because you will not be disappointed!

The following page is taken from the programme for the August meeting. It suggests that the hope that the first event at the National Stadium would help bridge the divide between racing on the short ovals and the traditional racing establishment had failed.

There are, perhaps, indications that efforts to bridge this gap in the more recent past have been a little more successful. In January 1998 the F1 Stock Cars made their debut in the Live Action Arena at the International Motor Sports Show.  This helped a much wider audience appreciate the skill and entertainment value of contact racing, so much so that the F1s returned to the NEC show in January 1999 and 2000 not only in the Live Action Arena but also to headline a full indoor meeting.

Equally important and welcome is the regular reporting of short circuit oval action alongside the all other forms of race action in the weekly publication MOTORING NEWS.

E-mail your comments, contributions and suggestions to rollingstart@yahoo.com

Please note: All content on Rolling Start is copyright protected and cannot be reproduced without written permission and must be properly sourced. This applies to all pictures, video and stills from video.